I play the drums for 23 years now. When I reached my teen years, I knew I wanted to do this professionally when I’m grown up. I finished my music studies in 2018 and since then my job description is officially „Self independent musician“.
I do session work live and in the studio. My main time goes into teaching. I love sharing my passion with others.
Also, I’m really into „Effective practicing for musicians“ which I teach at „Macromedia University“ in Freiburg.
My current band is called „Dr. Bær“.
Dr. Bær is a Progressive Metal band from Freiburg, which combines the usual genre-typical elements such as odd time signatures, lower tuned instruments, unusual song structures and a high degree of energy and aggression with influences from such opposite styles as blues rock and world music. The band itself affectionately refers to the style resulting from this synthesis as “Brutal Ethno Prog” and thus hits the proverbial nail on its head.
Since the founding of the band in 2017, an EP (Galama 2017), a concept album (Exercises in Composure 2019), and several singles have been published. Throughout 2022 our first official music video will be released.
Highlights of my musical career so far:
– 2012 – 2014 extensive touring with award-winning Australian Folk Guitar Player „Tim McMillan“
– 2015 opening for international known Jazz/Metal Band „Panzerballett“ with „Surrilium“
– 2018/2019 tour with „The Privateer“ (Pirate Metal, Freiburg)
– 2019 Release of my own solo album „Mind Split: The Inner Fight“
– 2019 Release Party „Prog Frog“ with „Dr. Bær“
Besides „Collision Drumsticks“ I also proudly endorse „Soultone Cymbals“.
”Press quotes & testimonials”
1.) From “Babyblaue Seiten”
About: Solo Album „Mind Split: the Inner Fight“ (2019)
Quote: „A short album, but astonishing“
Link: http://www.babyblaue-seiten.de/index.php?content=review&albumId=18573
2.) From “Rocktimes”
About: Tim McMillan Album „Hiraeth“ (2017)
Quote: „Not only McMillan is shredding but also bass and drums join in this furious blast“
Link: https://www.rocktimes.info/Archiv/gesamt/m/tim_mcmillan/wolves_of_stuenz.html
3.) From “Hellfire Magazine”
About: “Dr. Bær single „The Day I invented Rain“ (2020)”
Quote: „With the new single, Dr. Bær condense their musical being in a 11minute track, which shows to be more diverse then some comparable album
Link: https://www.hellfire-magazin.de/dr-baer-veroeffentlichen-neue-single-the-day-i-invented-rain/

Size:2B
Favorite Thing about Collision Drumsticks:
The team.
They really pay attention to being connected to me as an artist.
They take care of all there endorses in a very family-like way and that is so important in my opinion, because working together is key.
Carlton the CEO and I had a personal Skype call and we talked about „Self development“, setting and achieving goals – then I knew – I definitely want to become a part of the family!
I recommend Collision Drumsticks because of:
Endurability!
It’s crazy how much longer they last! Compared to all sticks I’ve used to far, they really do their job well – for a very long time! No other brand I’ve used before, has that quality.
Adjustability!
You can create your very own signature sticks – how cool is that? 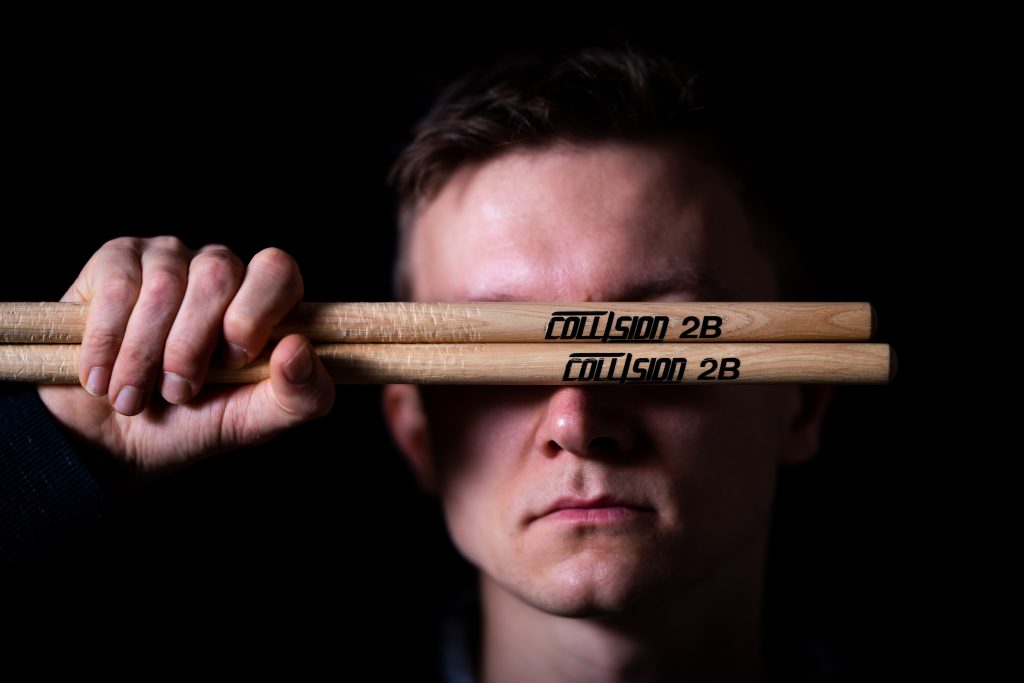