ABOUT JEREMY XERXES DRUMS
Jeremy Xerxes is a Tucson Arizona native drummer who embraces a unique style of drumming. Energetic, powerful, and dynamic describes his ability to work around the kit while keeping the viewer engaged in a way that few AZ drummers can accomplish. Jeremy Xerxes has been a part of many projects in Tucson- his most recent membership was a reggae-inspired SoCal Rock group called Rilen’ Out which played landmark local venues such as the Rialto and shared the stage with other local greats including Tommy Will; as well as national reggae legends, namely Kyle Smith, DUBBEST, Synergy, Keith Okie and Rebel Sol, The Riddims, Skyler Lutes and Skunkdub. Prior to that, Pyrotechnica was his most involved project- a Synth-pop Alt-Rock band that has been dominating the Tucson scene since 2017. In Pyrotechnica, Jeremy was instrumental in creating their first full-length album, “Red” (with Elastik Lab Studios), and their first music video of “Ignite” (with Lance Gerger Productions). As a member of Pyrotechnics, he shared the stage with national greats such as Trapt, Kingdom of Giants, Haken, Thank You, Scientist, Kobra, and the Lotus, and Xandria, and his touring experience includes the Southwest Region of the U.S. In addition, Jeremy has been an advent YouTube performer since 2015. Since then, his dedication to online production has earned him drum product sponsorships with Soultone Cymbals, Cympad Chromatics, and Kelly Shu microphone suspension systems. Jeremy Xerxes is always looking for new ways to collaborate and create with other artists while currently developing his brand. Feel free to check out his content and reach out for potential creative opportunities.

PRESS QUOTES & TESTIMONIALS:
“Jeremy is a phenomenal musician to work with. His attention to detail was always superb, attitude always on point and his drive to succeed was nothing short of amazing. The dedication he exuded towards his drumming always inspired me as a guitar player to step my game up and kept me on my toes. The energy brought by this man is unbeatable, and the audience could see that every time I witnessed him perform. A go getter if I ever saw one! – Jon Lytwynczuk, Lead Gutarist of Desert Fish, facebook.com/Lytwynczuk

I play drumstick size 5BR. I absolutely enjoy the weight, balance, strength, and durability of these sticks. In recent months I’ve taken to additional showman features such as “stick tossing” and twirling while playing. The Collision 5BR’s have really helped in terms of balance and grip. As far as the Collision brand, I can not say enough great things about their community support for drummers! Collision’s #1 priority is the global drummer community and that can be experienced first hand in their BackStage feature within the online platform- I highly recommend joining BackStage!. 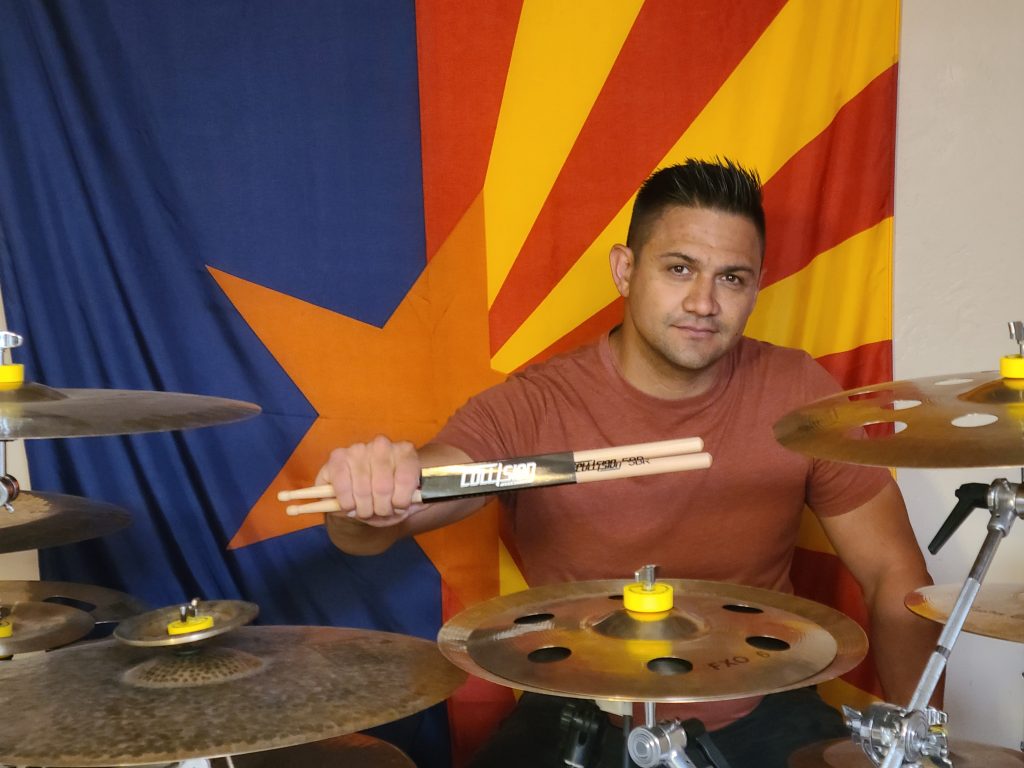