Inspired by Ringo Starr, Jon started playing at the age of six. From there, he played in music classes in elementary school, middle school, and performed in the award winning Jazz Band and Marching Band at Glendale High School in Glendale, CA. After high school, Jon attended Musician’s Institute in Los Angeles. There he studied with some of the best session drummers such as Rob Carson, Donny Gruendler, Charlie Waymire, and Glen Sobel (currently Alice Cooper’s drummer). After college he immediately began working full time as a session/touring drummer; playing in venues all over the US, including the Grammy Museum in Los Angeles, the Winspear Centre in Edmonton, Canada, the Capitol Theatre in Port Chester, NY, and of course Carnegie Hall in New York, NY when Jon was 20 years old.
Today, Jon plays in somewhere between 15 and 20 bands including the internationally touring Rolling Stones tribute act Jumping Jack Flash, The Who Experience, and the Gold-record band The Chambers Brothers. Jon has shared the stage with bands/artists such as Eddie Money, America, Joe Bonamassa, George Thorogood, Bobby Brown, and many others throughout the last 12 years. Currently, he is endorsed by Soultone Cymbals and he is very much looking forward to being endorsed by Collision Drumsticks. He also occasionally writes bios in the third person.

I play with 5BR.
Putting aside the fact that, after 24 years of playing, I’ve finally found the drumstick size/weight I’ve always been looking for, my favorite thing about the Collision brand is the consistency. The fact that every pair of 5BRs I pick up weighs and feels exactly the same as the last pair makes my job that much easier and more fun.
I would recommend Collision to any drummer who, like me, drops or breaks sticks during shows. It happens, and knowing I don’t have to worry about the next stick I grab feeling different is a breath of fresh air. I can’t think of any other brand where I can say the same thing. 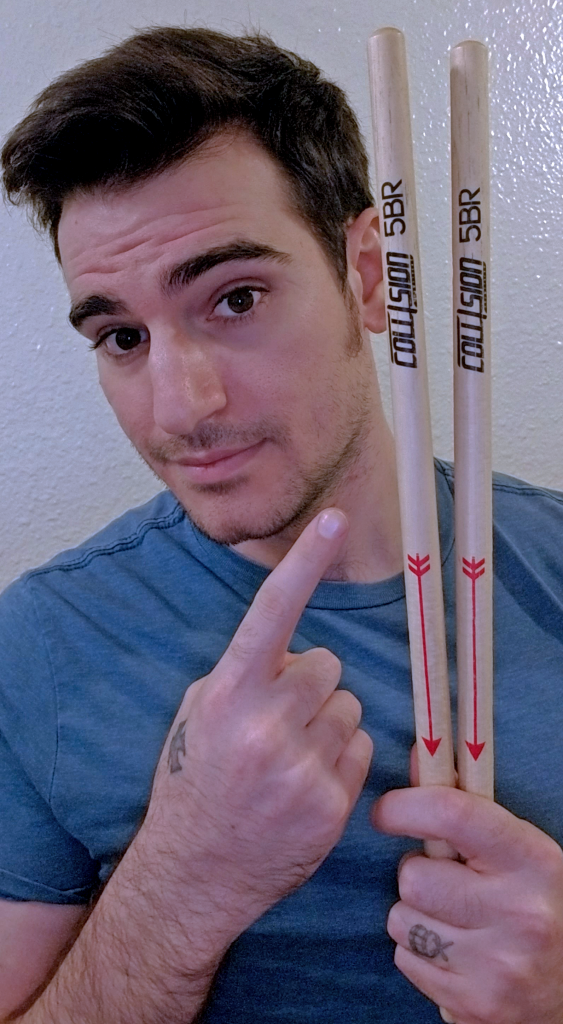