I’ve been drumming since I was 17 years old and have a wide range of musical tastes. My early influences came from drummers such as John Bonham, Ian Paice, Bill Ward, and Clive Burr to name but a few. So my style is mainly rocking. Up until now have played with mostly covers outfits playing a large mix of material and genres. I am now with Misophonia and have been since early 2020, and thus completing the current lineup of Jay Ross, Xtina Barroso, Justin Laidlaw, and Neil Dunnachie. Misophonia began with shows including a minor support slot for Dutch stoner rock trio Volcanova in the 13th Note in Glasgow. Following this Misophonia then went on to play a sold-out local talent showcase at Edinburgh’s much loved Banshee Labyrinth, playing alongside Gunpoint-X, Corrupt the system, and Anomos. The gig was actually organized by Misophonia and the night was aptly titled ‘Metal Mayhem’ receiving rave reviews from local bands, gig-goers and it also received some positive press from a webzine Journalist who was in attendance. The next gig was a crowning glory and was the opening support slot for newly formed Doom Metal Trio Godthrymm, featuring ex-members of My Dying Bride (a big influence of Misophonia’s vocalist) this was held in Ivory Blacks in Glasgow. After this Misophonia organized another Metal Mayhem showcase, and again this show was sold out. Featuring this time the bands Nassau, Nocturne Wulf, and Dolour. Misophonia was then contacted by the now major label signing Unto Others formerly known as Idle Hands. Misophonia was approached by another signed act for yet another opening support slot. However the latter two shows never happened as Misophonia lost two key members and the band went on a hiatus, the rest is history. Misophonia re-emerged in the spring/summer of 2020 with a new lineup, a new hunger, and a new sound. 2021 seen the band release a self-produced single of which was accompanied by four demo tracks and made up the aptly titled Misophonia comeback ‘New Beginnings’. This EP was released on 21/1/21 and this release then saw the band signed to Madness Records and at moment writing some new material for our debut EP.

I am currently playing Collision 5B’s. My favorite thing about the Collision brand apart from the stick quality is that you become part of an extended global family. I would recommend Collision sticks is they are lightweight, durable sticks perfect for my style of play. 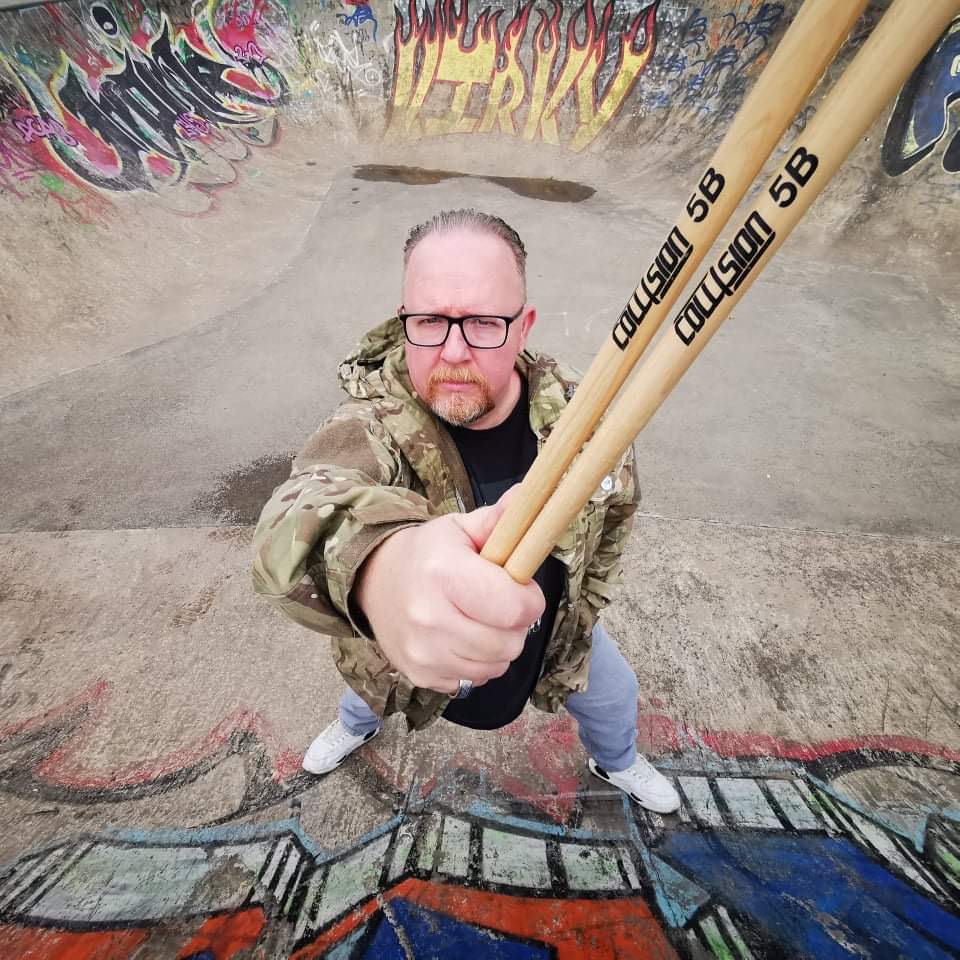