From about 14 years old, I wanted to play drums. I listened to all kinds of music, mostly classic rock/heavy rock. Being self taught, I would work out what the drummer was playing by ear, replay the drumming rhythm in my head and memorize it.
My drumming heroes and main influences were Neil Peart, John Bonham, Phil Rudd and Tony Thompson.
I started playing in a couple of local bands between 1986-1992. We played in pubs and clubs on the South London circuit, notably the Woolwich Tramshed, Jongleurs in Battersea and the Rock Garden in Covent Garden, London.
Fast forward to 2016, one of my old bands decided to reform after 28 years. We briefly played on a casual basis doing a few gigs in the local area. It was a lot of fun to get the boys back together after such a long time.
In 2019, not long before the COVID pandemic, I was introduced to Edd (lead singer of Motor Raider) who was looking for a drummer to join the band. There was a real connection between all of us within Motor Raider. We have a shared passion for classic rock, heavy rock and progressive rock.
In 2021, my wife threw me under the bus and put me forward to join her theatre group for their production of the rock opera, Tommy, written by Pete Townshend. As the drummer, I was part of an 8 piece live band performing all of the songs from the rock opera.
My Collision 5AR drumsticks were an integral part of learning the musical score for Tommy. I do not read sheet music and devoted the time to learn 33 songs by ear for the show. The show was put on at the EM Forster Theatre, Tonbridge, Kent and delivered 5 shows over 4 days, to an audience of 1000 people in Kent.
During the Covid Pandemic lockdown of 2020/21, Motor Raider made good use of the time in insolation. We continued to record songs, sharing our independent elements of each track recorded remotely and released the albums The Big Pit and The Journey So Far, as well as a comedy sketch album.
Motor Raider’s sound has been compared to a mixture of modern bands such as Electric 6 and The Whitestripes, as well as classic bands such as Thin Lizzy, Judas Priest and Motorhead. The unique collection of ages/backgrounds that make up Motor Raider allow for a sound that is a mixture of classic rock and new rock.
This year, the band have made fantastic progress with promotion and securing gigs. During the summer of 2022 we played two local festivals, The Fringe and headlined Local and Live. We’ve supported Syteria at The Cart and Horses, Stratford and also Paddy Goes To Holyhead at The Cavern Club, Wimbledon.
Myself, Edd, Graham and Ian look forward to what unfolds in the coming months and to unleash some serious Motor-Raiding on the world.

The Collision 5AR sticks are perfect for my drumming. The sticks feel great, aligned with the desired weight and balance too. Predominantly, I play a Roland E-kit for practice and use my acoustic kit for gigs. I’m impressed how resilient the sticks are, even under punishing playing, so far, my first pair have lasted much longer than other brands. I’d wholeheartedly recommend the Collision 5AR drumsticks. 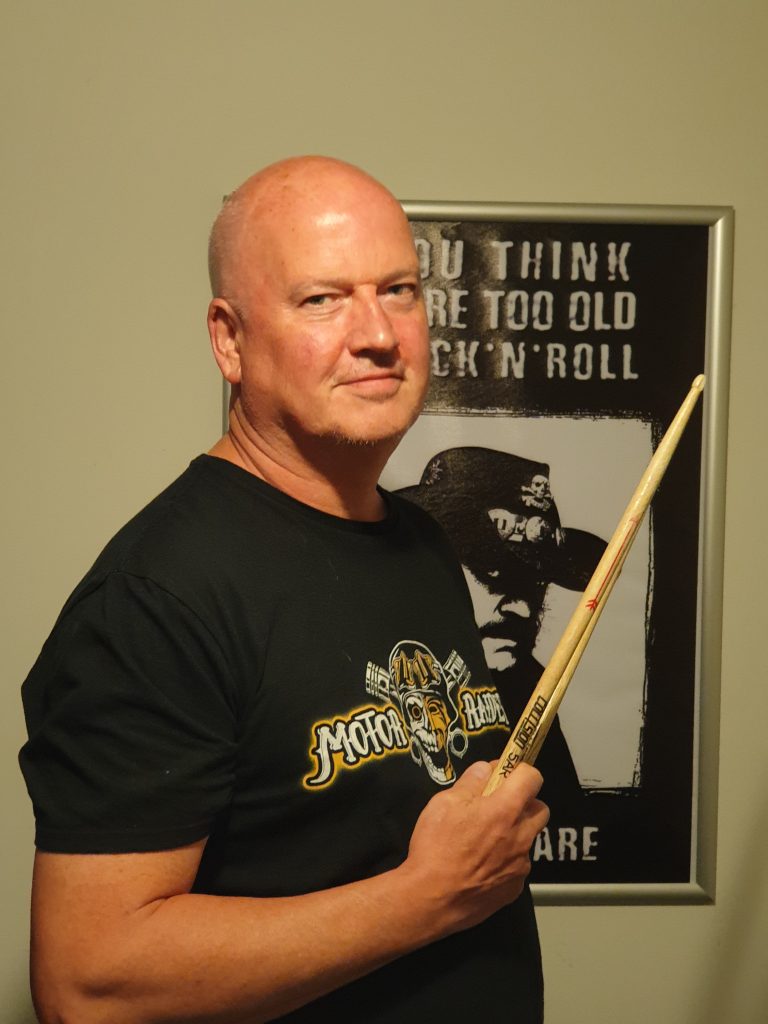