From a young age I knew I wanted to be a musician in a band. I started my love for music and drumming from the age of 10. I got into the classics – Sabbath, Maiden, Zeppelin etc. After a couple of lessons to get a grasp on the basics, I began to study drummers’ styles – Chad Smith, John Bonham, Chris Adler – and this helped me to create my own style – Funk Rock with some Metal influences sprinkled on top.
In my career as a drummer, I have had the honour of supporting bands such as Eskimo Callboy, Attila, Valis Ablaze, Monuments and Bleed From Within.
I was the drummer for ‘Fonzy & Company’ – a Bristol based, Americana Rock band, who are looking forward to recording their third EP ‘Thouché’. We have had tracks played on radio stations in The States, as well as across Asia and Eastern Europe. The band’s influences completely differ from each member – from The Cranberries, Lady Gaga, Paramore, John Mayer, Green Day, Foo Fighters and Rush to name a few – which makes our sound so unique!
I am also playing in a function band called ‘Funktion Up’, who mainly do private events.
For those who are interested, here is a break down of my kit set up:
– Ddrum Hybrid Drum Kit – 20×20 kick drum, 12×10 rack tom, 14×12 floor tom, 16×14 floor tom.
– Ludwig – Black Magic 14×8 snare drum
– Sabian Cymbals – 15″ HHX groove hats, 17″ HHX X-Treme Crash 19″ HHX X-Treme Crash, 20″ AAX X-Plosion Crash, 21″ HHX Groove Ride, 10″ AAX Splash
– Tama Speed Cobra double kick pedal (with aluminium beaters)
– Assorted cymbals stands
I am truely honoured to have the opportunity to be a part of the Collision Family – such a proud moment for me in my musical career. Not only will this be beneficial for the band, but also for myself as a musician, and I will be able to contribute my thoughts and opinions to aid the development of a company that always has the musician in mind.
Press quotes & testimonials
“The band pushes past every genre boundary and always include a catchy tone in whatever they’re releasing.” – Music Is To Blame
“When music is this good, you don’t have to reinvent the wheel.” – The Alternative Mixtapes
“10/10 A full catalogue of lyrics written by the pen of a master.” – Stargazer Magazine
“This is the next band on your playlist.” – Invicta Magazine
“A modern day Fleetwood Mac.” – BBC Bristol 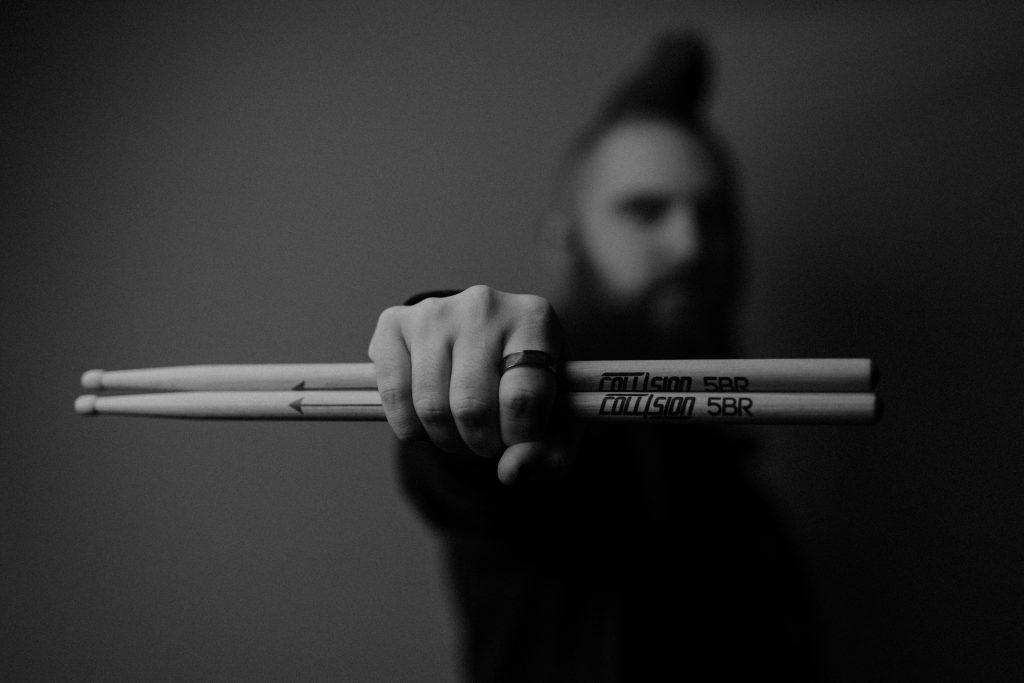