Visit Youtube
Hello everyone, my name is Shawn Tillett and I am a semi Professional Drummer from London, UK
I Currently play drums for UK Deathgrind Band Total Consumption and UK Groove band Secreum
Going Back around 15 years ago, my sister was learning drums in school, she had a mini electronic drum pad machine to practice on and i really wanted to have a go on it and she told me” Take up drumming / Drum lessons and you can”
and that’s where my journey of becoming A drummer begun
Throughout the years of starting Drumming, doing trinity Collage exams and becoming the school Drummer in 2009, I Started listening to heavier bands. That’s where I discovered Slipknot, and seeing joey on his kit, playing upside down was the best thing I ever saw, which inspired me to keep on Drumming
In my 10+ years of drumming and 3 humble and extremely fun years of being part of Total consumption, we have released 3 EP`s, our most recent being “Inconveniences” in October 2020, and 1 Split EP, we have played many venues such as The black Heart, Unicorn, The Devonshire Arms, The Rebellion and the famous Camden underworld
supported many bands including “Suffocation”, “Origin”, “Underside”, “Hate Diplomacy”, “Party Cannon”, “Crepitation” and many many more

I play with Collision 2B drum sticks
The drumsticks have a great and well balanced feeling to them whilst also being strong and very durable,
After a 3 hour rehearsal session they were still like new retaining their shape without any splits or cracks
I would recommend Collision Drumsticks because they Feel very Durable, Strong and the added extra length gives that little extra power with every stroke without energy loss 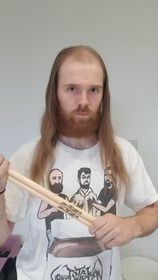