I’m Ted Marotta and I’ve been a professional touring and session drummer for three decades. I began playing drums when I was about 9 years old. I joined a band called Ominous Seapods when I was 19 and we toured nationally for over a decade. We earned a large national following and played some amazing venues like The House of Blues in LA, and Red Rocks Amphitheater in Colorado. We played every state in the US except Alaska and Hawaii, and toured in Mexico and Canada as well. During that time I also became a producer and recording and mix engineer, built a home studio, and produced several records for other artists over the years. After Ominous Seapods got off the road, I continued producing records for other artists while I earned a PhD in American history and taught as a college professor for a number of years. Eventually music called me back and I left academia to begin working professionally again as a session drummer. Along with session work, I am now again touring nationally with a fantastic new group called Doctor Lo & Le Band. I also recently signed and endorsement deal with the incredible handmade Turkish cymbal company T-Cymbals. Music has always been my life and I’m thrilled to be touring and making records again. Along with touring professionally, I also host a music and creativity podcast called A Little Bit Famous with Ted Marotta, and I’ve had amazing episodes with an incredible lineup of guests including Steve Gorman from The Black Crowes and legendary record producer Steve Lillywhite.

I’m using the Collision 5As. My favorite thing about Collision is the quality and durability of their sticks. I’ve never played a pair of sticks that have felt so perfect for me and my style of drumming. I highly recommend Collision Drumsticks because of the impeccable quality of their products, the amazing artist support, the personal and friendly relationship they cultivate with their artists, and the focus, excitement and energy that the company clearly exudes! 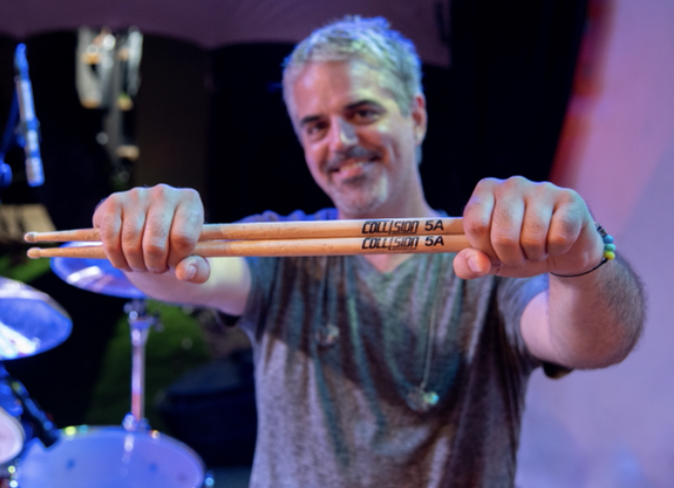