I began formal drum lessons at age six.  I played my first live show at age ten.  I made my pro stage debut at age thirteen, playing second drums and percussion for Oingo Boingo Former Members at venues across California, over three years (2016-2019).  I have played live shows at the world famous, Whisky-A -Go Go in Hollywood, as well as, The Fonda Theater,  and The Saban Theater, as well as, Humphrey’s Concerts by the Bay, in San Diego, to name a few.

I can be seen in the YouTube program, “Warren Huart’s ‘Produce Like a Pro’ – where Warren recreated and rerecorded the original 1978 Van Halen debut album, where it was created, in Studio 1 at the famous Sunset Sound studio in Los Angeles.  I played drums on the entire rerecording.

I have played drums live in the Strange 80’s Sweet Relief charity concert, where I was honored to share the stage with artists like Tenacious D’s Jack Black and Kyle Gass, as well as Jane Wiedlin (Go-Go’s), Corey Taylor (Slipknot), Scott Ian (Anthrax), Weird Al, and many, many more artists.I also played drums on the USO Bob Hope stage, aboard the USS Iowa for L.A. Fleet Week, where I shared the stage with Vince Neil (Motley Crue).

I have been featured in Drum! magazine (April 2018, “New Blood”), and, was a featured guest on Drum Channel, with Don Lombardi (Johnny Hernandez Introduces Thomas Lowrey, July 2018).

In 2019, I played drums in two music videos with the metal band, Crisis Couture: Waiting on the World to Burn & Take Back the Power.  In 2020 I have formed a new prog metal, independent band called, Iterum, with lead guitarist, Julia Lane.

I have been an endorsed artist with Collision for over two years. I play 5A, Collision Custom, signature sticks.

I decided the best way to go was to test them out.  I had to have them in my hands to test the feel and balance.  And then, I would check for something that was very important to me, durability. I am a hard hitter, and play a lot of heavy metal and hard rock music, so I do break sticks, which can get costly.

In my opinion, the Collision drum sticks held up the best!  They were less splintered and seemed stronger.  I decided to give them a try full-time.  I placed a larger order of sticks, and played them in live shows.  They felt great in my hands, and I did not break one in a live show, or rehearsal!  In fact, to this day, it is rare that I break a Collision drum stick, as compared to how often I broke other brands. There was the durability I was looking for! 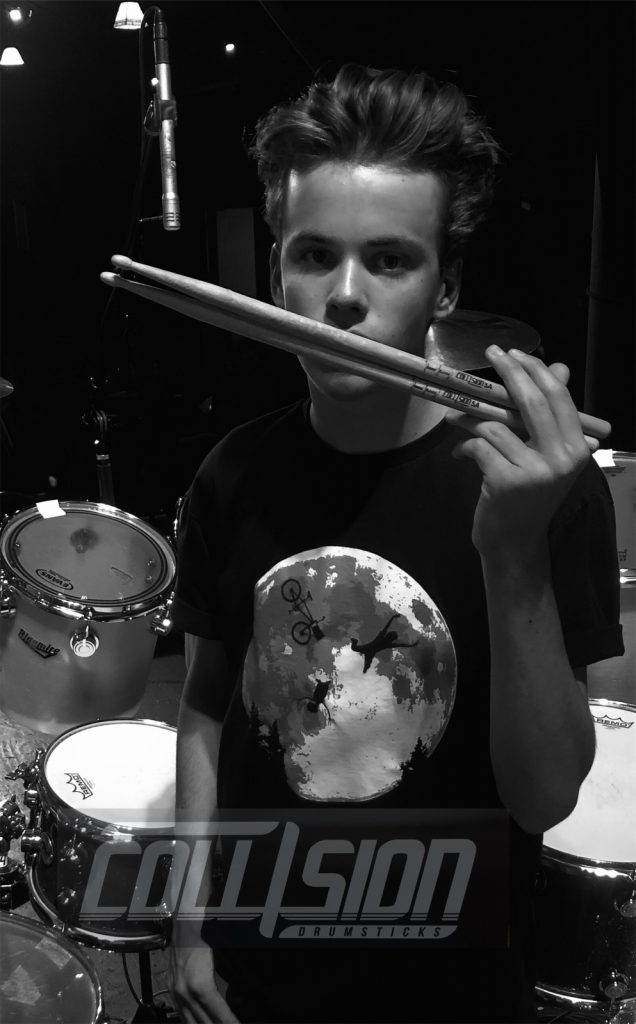