My name is Valon Berisha, I live in Prishtina, Kosovo. My joy and passion for playing drums started at a very young age. Influenced from my older brother, I started my journey with a dream! A dream to become a professional drummer.  One of my childhood joys, that always brings wide smile to my face, was watching the “Animal” from “The Muppet Show”, the monster who played drums, often repeating a phrase such as “BEAT DRUMS! BEAT DRUMS!”. The next thing I know, I started striking objects with anything I could find that resembled drumsticks. Later, I improvised my very own drum set with buckets and barrels and played along the tunes of Gun’s N’ Roses, Pearl Jam, Nirvana and other 90’s bands. In my teen years, I received my very first real drum set as a gift from my brother.  The joy was massive and drumming became more than just a hobby.

Following my dream, I quickly emerged as a member of a few Rock/Alternative and Nu Metal bands with whom I stayed for quite some time. My journey had started and took me to places I always wanted to be.  Shortly after that, I realized that I was developing interest in other genres as well, such as Hip-Hop and Pop. That being said, I started playing drums in various clubs as part of their music show programs. Also, I’ve been part of numerous festivals where I performed live shows with various DJ’s including the fact that I had the opportunity to share the stage with well known artists such as Chamillionaire, The Game, Busta Rhymes and few more.

Currently, I play drums for an Albanian Pop artist, Dafina Zeqiri and a Hip-Hop artist, BimBimma.  I’m a member of an alternative band “Trampoline” and the co-founder of “Prishtina Drum Festival” that was launched  for the first time in 2019.

I play Collision STANDARD 5B. There are many things that I like about COLLISION. First of all, their durability is outstanding.  The tip of the stick doesn’t chip off as it does with other brands. Second, the feeling you get when holding COLLISION is beyond reality, it gives you the impression of holding an attachment connected to your hand that allows you to perform smoothly around your drum set. Third, their anatomy and overall design is perfectly suitable for heavy hitters and generating precise tones. Finally, the team that works for COLLISION is remarkable. The assistance they provide is always managed in the most accurate way. I am beyond thankful that I have got the opportunity to be part of the COLLISION family. 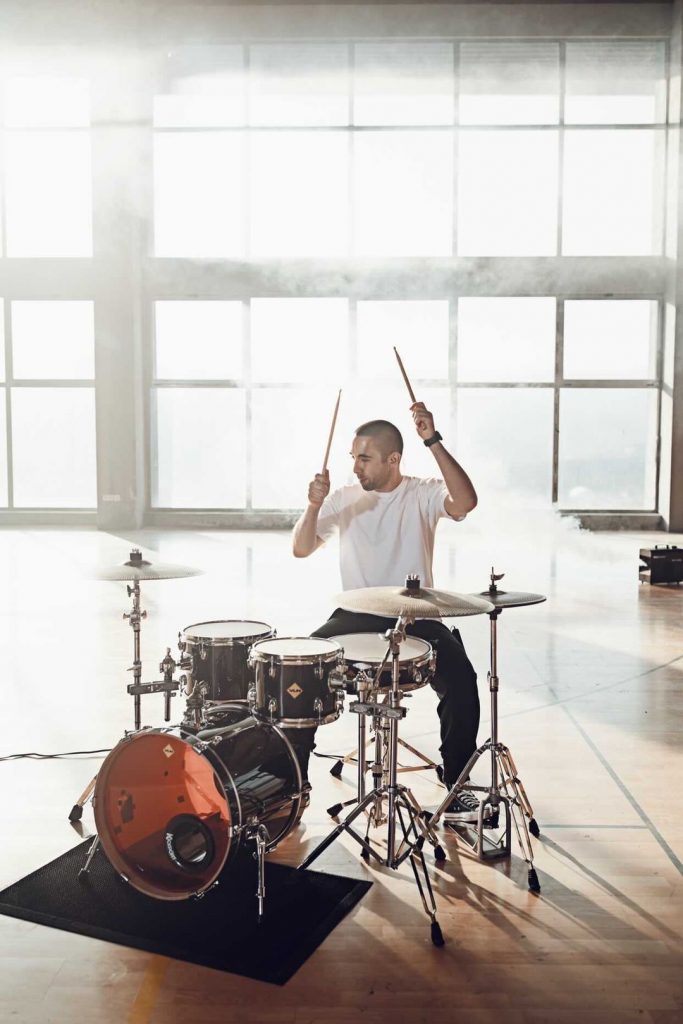