I’m Carter Wiedenhoeft, known to some fans of my music as Crabgrass. I’ve been playing drums for about sixteen years. I currently play for two bands: bluegrass-infused folk rock outfit Knee-High July and La Crosse Wisconsin’s experimental hip-hop supergroup The Lavender Project.
Knee-High July began in the summer of 2019 when rhythm guitarist Jesse “Bones” Johnson asked me to join an as yet unnamed group with him, banjo player Jacob “Banjo Jake” Mantzke, and frontman/lead guitarist Josh “Dog Blood” Ammann. The then four piece played four shows before COVID-19 stopped live music in its tracks. We, however, did anything but stop. During this time, KHJ hunkered at our practice space, becoming tighter in our musicianship and writing song after song in hopeful preparation for the eventual return of in-person shows. We even recruited bassist Anthony “Big Tone” Speer to complete the band’s lineup. In late Summer of 2020, we recorded an interview with the La Crosse Local Podcast which then resulted in a performance for the “Garage Sessions” Livestream series. This Livestream marked the beginning of my other band: The Lavender Project. After the cameras stopped rolling, our friend, rapper Jet Hertz, who was helping us run sound for the stream, joined us in a celebratory freestyle jam. The camera operators loved this and started streaming again to capture the explosive behind the scenes moment. We recruited rapper Fernando Mendoza, multi-instrumentalist Kyle Crayton (also known as One More Onion), and vocalist Stephanie Helgeson to join Josh, Anthony, and myself in the foundation of the new musical endeavour. Thus, the Lavender Project was born. Shortly after this event, Knee-High played a couple of other streamed events including a Garage Sessions Holiday special, for which we wrote an original seasonal tune. Then, the Lavender Project played its own Garage Sessions set to immense local acclaim. With YouTube resumes building up, both bands sought to fill the Summer of 2021 with shows and spent nearly every weekend of those months playing multiple gigs at home and as far away as Ashland Wisconsin and Dubuque, Iowa. Both bands are highly regarded in our regional scene and climbing as we continue to book shows whenever possible. Going into the new year, the Lavender Project’s primary directive is to record their songs for online distribution. Knee-High July has, in addition to existing “self-bootlegged” recordings of live performances, a set of studio recordings yet to be released. Keep your eyes on our social media for updates on shows, recordings, videos, and other band antics.

I’ve been playing with Collision 5B drumsticks for the past couple of months and am incredibly pleased with their performance. The weight feels nice and balanced in my hand and their durability is second to none. I play pretty hard and as such, I tend to break sticks with some frequency. I’ve played six shows with these sticks so far in addition to countless hours of at home practice and they are still holding up! The tips don’t wear out or chip away nearly as quickly as on other brands I have used. I recommend these sticks to any drummer, but especially to my fellow heavy hitters, for their durability and balanced feel. 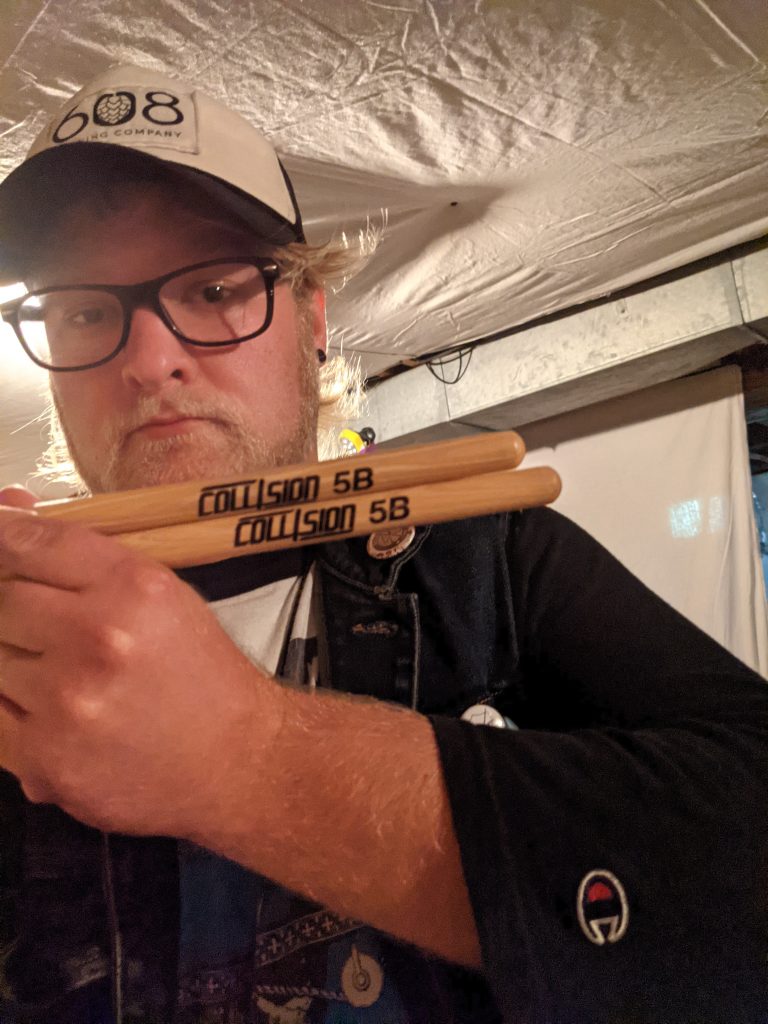