Pedro Joaquín Longinos Ochoa was born in the city of Santiago de Querétaro on January 30th, 2002. In May 2011, he joined the Esperanza Azteca Children’s Orchestra of Querétaro, in the percussion section having as Master the percussion principal of the Philharmonic Orchestra of the State of Querétaro. For 3 years he was an active member participating in different concerts inside and outside the city, performing in squares, schools and theaters such as: Teatro de la Ciudad, Teatro Metropolitano and the Josefa Ortiz de Domínguez Auditorium where the inaugural concert was held on December 12, 2011 being Timbalist and main section. He was invited as an extra in the chamber orchestra of the city of Querétaro and as a percussionist in the musical “Nican Mopohua” by author Pablo Gonzáles Olaya.
In August 2018 he began his professional musical studies in Celaya’s Conservatory of Music and Arts in the specialty of percussion, under the tutelage of Dr. Iván Manzanilla Rahal. He has taken master classes with the Masters: Álvaro López, Israel Moreno, Joseph Pereira and Juan Martínez. Since August 2019, he has joined the Silvestre Revueltas Youth Orchestra as a percussionist, under the direction of Maestro Jesús Almanza, with which he has participated in all its seasons to date, has participated in the first edition of the Cervantino International Festival (2021), as well as tours to the cities of: Zacatecas (Zac), León (Gto) and Mexico City. He participated in the staging of the “Mariachi Sinfonico” by Composer Guillermo Diego, which took place in the Zócalo of Mexico City for the Festival “México en el Corazón de México”, closing the Festival in a Masterful way in March 2020.
On September 16, 2021, he officially started playing with the group Los Nuevos Descendientes as a drummer, a group of “Norteño Sax” started in March 2021 made up of: Félix Sánchez as main voice, Uriel Sánchez as percussionist and second voice, Missael Sánchez as bassist and third voice, Edgar Sánchez as accordionist and fourth voice, Octavio García as Saxophonist, Israel Hernández as guitarist and Pedro Longinos as drummer. The group’s headquarters are located in the community of Rincón de Centeno in the municipality of Juventino Rosas and they currently perform live at private parties and patron events inside and outside the state of Guanajuato.
Pedro Longinos is currently studying seventh semester of musical high school under the tutelage of Professor Marco Antonio Peralta.

I use Collision Size 5BR. My favorite thing about de brand is the support they give to many drummers, from the smallest to the largest around the world. I recommend the collision drumsticks for the quality and resistance of their material, also for the weight of the drumsticks since of the brands i have tried it has been the one that has accommodated me the most from the first moment I used them. 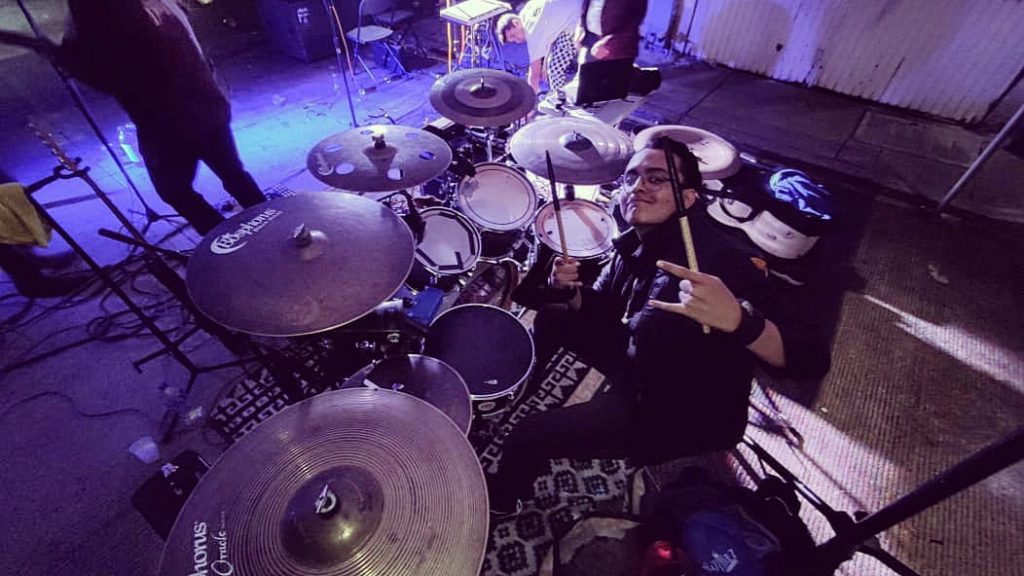