Hey there, My names Seth Winfield
I’m a 17year old College student, born and studying in Exeter. I am in my second year at Exeter College, on the UAL Music Performance Course.
My first experience with drums was in school when I was 10. Even before actually playing the drum set, I had always listened to the drums on a wide variety of music. But when i picked up the sticks, I knew I was never going to put them down.
I’ve played with friends in high school. And like everybody does we started cover bands, and performed for our peers.
I joined Rock School at the Academy of Music and Sound, and found people my age and older who gave me the opportunity to play in more organised spaces. My first proper gig with them, was at their 25th anniversary in 2019. We played at the Exeter Phoenix. I was nervous until the moment we started playing, and this confirmed for me that this was my path in life.
Lock down was one of the worst times for musicians everywhere, But because of it, I had developed my drumming skills even further.
Bands and experience
APATHY
This is a 3 piece band formed recently, we share a love for metal and writing original material. As a group we love listening to each others music, and individually we all come from slightly different musical directions. This gives us a large library of sounds and influences to bring to our own work.
As well as me, the drummer, there are two guitarists, Tom , Oscar. In our local scene, we may have a small lineup, but we make the loudest noise. The place we shine and sound the best, is live in front of people. We all share a love of preforming.
FYRE ESCAPE
Fyre Escape came out of the Rock Project. We are a 6 piece cover band with younger musicians than myself. We all like to implement our musical taste into our setlist. We comprise of 2 guitarists, 2 singers, a bassist, and myself the drummer. We have rehearsed at Tazma studios, and we’ve played at many outdoor festivals and holiday sites. As a cover band. it is easier to find places to gig and relatable songs. I enjoy playing with many different musicians, whatever their genre or age. I believe that playing as many different genres as i can, is the key to being a well rounded musician.
“Press quotes & testimonials”
Review of Fyre Escape on Facebook headlining at Bovey Tracey:
“Teenagers these days, who do they think they are? Dedicating themselves to their craft for hours every day so they can become professionals.
This band is Fyre Escape, rocking covers from Led Zeppelin, pink Floyd, Radiohead, The cranberries and more.”
-Michel Campling.

2B/
The staff who run the company.
They were really helpful and kind for a young musician such as myself.
The drumsticks themselves are extremely well built and balanced.
They have a wide range of sizes and you can even make your own custom sticks which i find incredible.
The company is very helpful and are very good at communicating with their contacts. 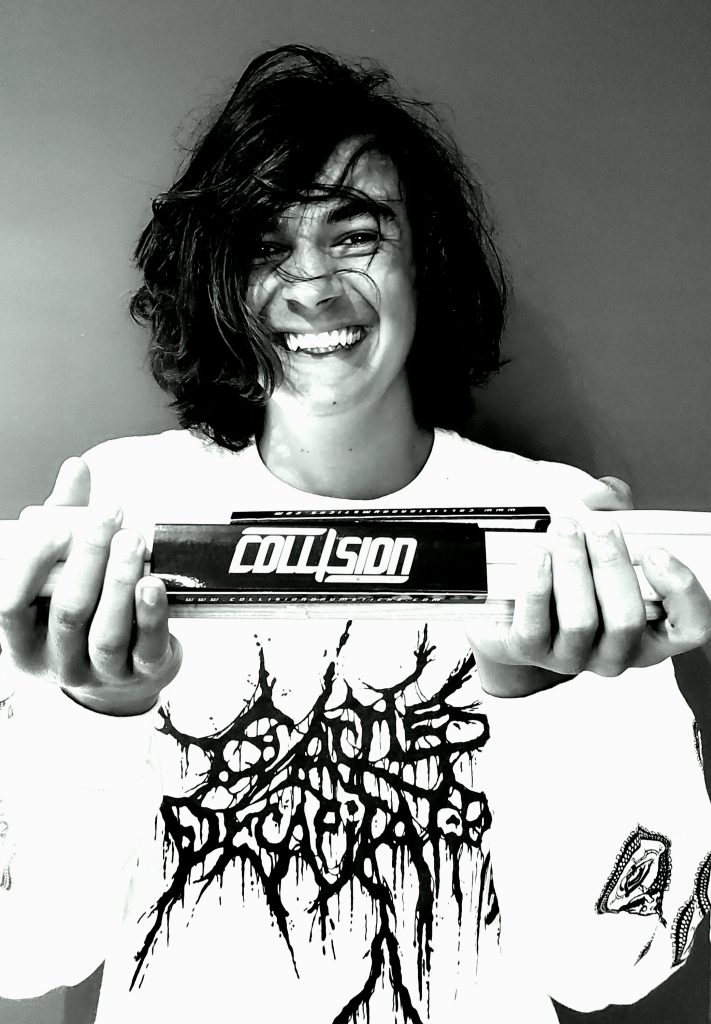